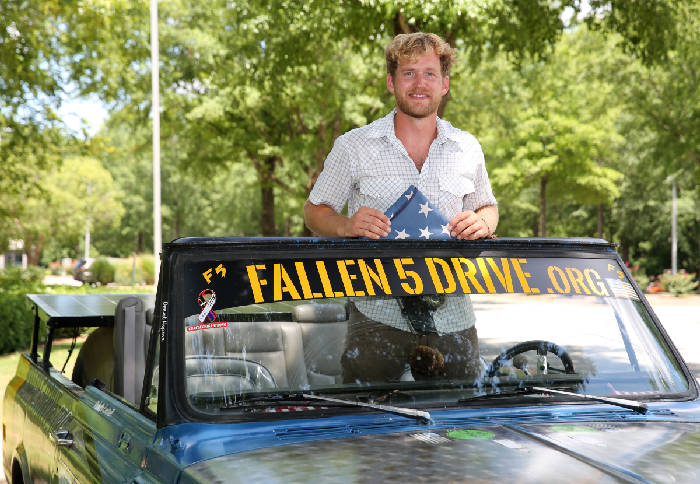 The mission is set! September 6th is the day of departure! We will be on the bridge on September 11th as that seemed to be the most fitting date since we were delayed. So much work has gone into remembering the Fallen 5. The support of the community was felt and so much love was shown!

Over the past month or so we have been working hard to save the needed funds for our mission! We raised money from our sponsors and some threw in a few goodies to show their support.

The strong passion I feel to remember these men has driven me to sacrifice in the best way I know how to – which is to drive 5,000 miles to the Golden Gate Bridge where the flag will fly as it did one year ago. This flag is a symbol of solidarity and sacrifice. It stays folded until it fly’s on the bridge. This bridge to me is a symbol of where we are supposed to fight our battles. So many Marines and Sailors passed under that bridge and never came home after fighting for their country. The Fallen 5 never got a chance to fight back. So I will carry on their fight, year after year.

It seems now days, Americans are so divided. This is not how I want my country to be portrayed. This is not how I want to live. The Chattanoogan community came together on July 16th, and in the days following. I want the rest of the country to be like  we were on that day – UNITED! And we will stand –  for the flag, for each other, and for the Fallen 5. I fly a flag on the back of the Blazer of Glory for a reason, its because I’m proud of my country and love to celebrate my freedom!

Wish us luck as we depart on September 6th and stay tuned for the flag flying off the Golden Gate Bridge.